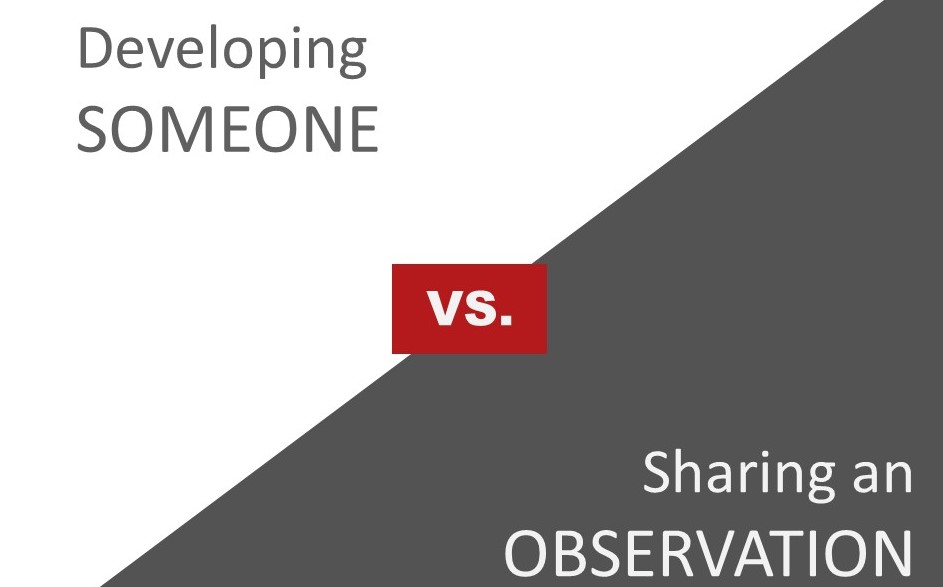 What’s the evidence of developing someone’s mindset or skill set? A behavioral change? If you haven’t seen one, then it’s a safe bet that you, like most managers don’t truly know how to develop their team. Throwing an article or course at them isn’t the answer. There’s a big difference between sharing an observation and developing someone. Here’s an experience I had when working with a team of talented Microsoft managers in Belgium.

While managers may believe they’re developing and building their team in a variety of ways, there’s a major disconnect between developing someone and sharing observations. Here’s what you can do to immediately accelerate performance, authentically develop your people, build their skills, and create champions. I’ll never forget the conversation I had on day two of my leadership coach training course in Belgium. It all started with a simple question.

“Can anyone here provide an example of when you developed someone?” A manager raised his hand and began to tell his story.

He said, “I was on a customer visit with one of my salespeople. Since the salesperson was running most of the meeting, I sat and observed positive behavior to reinforce, as well as behaviors he could improve upon which would help him achieve better results in the future.”

I thought, “This story sounds promising!”

The manager continued. “Well, after leaving the prospect’s office, we got into his car and began to debrief on what transpired during the meeting, while it was still fresh in our minds. I asked my  salesperson how he felt the meeting went. After sharing what he observed, I then jumped in and shared a few observations.”

“And what did you share with him?” I inquired.

“I started by telling him that during the meeting, I observed a few things to be mindful of for his next meeting that could help improve his performance.”

My curiosity peaked. “And what exactly did you share with him?”

“First, I noticed he didn’t set expectations at the start of the meeting around the prospect’s agenda and what the prospect hoped to learn and accomplish. I also told him he didn’t ask the prospect how much time they had allocated for the meeting, nor who else, if anyone, needs to be present who would be part of the decision-making process.

“Finally, I told him that he missed several questions during his qualification process when gathering the information needed about the prospect’s situation, unmet needs, current products and services used, pain points, what an ideal solution would look like, current priorities or competing initiatives, and their decision-making process, so that he could assess a fit and how he could add value. I told him that he needs to be more diligent with his questioning.”

At this point, I was looking for the manager to bring his story home with how he coached and further developed this salesperson’s skillset.

With excitement, I asked, “Then what happened?”

“Well, that was it,” the manager said. “That’s where we ended the conversation.”

I paused for a moment and asked, “So, at what point did you actually develop this salesperson?”

“I told you,” the manager replied. “I helped further develop them when I shared what I had observed.”

The defining moment was now apparent. I acknowledged the manager. “Thanks for sharing your story. However, I’m wondering if anyone noticed the difference between sharing an observation and developing someone, or are these two distinct behaviors being collapsed into one definition?”

Expand their Peripheral View – Then Coach!

When you share an observation, you are sharing a general overview of what you heard or saw; the best practices and opportunities for improvement.

When you’re authentically developing someone, you’re moving the conversation to a deeper and more tactical level that will cause a change in behavior and thinking. You’re shifting from a general overview and into the development and refinement of best practices or what needs to change to improve
performance.

This can include and upgrade or refinement in thinking, knowledge, behavior, communication or coach tracks and messaging (written, verbal and non-verbal). After all, leadership and selling are all languages of coaching to master and the most important, factor that distinguishes the top performers from the rest.

This is the area of opportunity where managers can positively transform people’s attitude, thinking, and behavior by challenging both their inner critic and outer voice to exponentially impact performance.

The lynchpin of success will always boil down to how positively and effectively you know yourself and communicate with people. Coaching unearths your inner voice to assess the validity and health of the stories you tell yourself and others.

So, how you can you take your feedback and turn them into growth opportunities? What would the rest of that conversation sound like? This is the struggle managers go through, as they often stop a few feet before the finish  line; right after sharing their observations because they assume positive behavioral change will follow.

How to Shift from Observation to Coaching

Building off my experience in Belgium, here are a couple of ideas and exercises to do with your team that will move the conversation from sharing an observation or a nice to know, to measurably improving performance through coaching.

“During your next sales call, don’t you think you need to do a better job qualifying and learning about each new customer?”

Does this cause a measurable change in behavior? Absolutely not.

While the observation may be relevant, it wasn’t followed by how it needs to be done and what exactly needs to change. Now, let’s look at the language that follows your observation.

Consider this approach when speaking with your salesperson: “What do you need to know about every new prospect and customer to earn their business and serve them best?”

You would then (hopefully) hear from your salesperson all the information they would ideally need to know to provide a solution that would solve their problems, save time or money, improve performance and efficiency, and be aligned with their needs and expectations of your service and results. From here, the billion-dollar developmental question would be, “What questions can you ask when qualifying each opportunity that would provide you with the information you need?”

Does this develop someone’s skills and critical thinking? Absolutely. The end product is, a salesperson who has an actionable and specific list of discovery and qualifying questions. These can become a documented best practice for the rest of your team. The best part is, this sales rep owns and embraces these questions because it was their creation.

While many managers do a great job enrolling people in observation, sharing feedback and having people align with what you’ve observed in them, they often stop right before they cross the finish line and move the feedback given into a coaching moment.

If you want to build a bench of champions and future leaders, it’s critical to go beyond your assumptions of how they do things by simply sharing a passive, “just so you know,” observation and coach them around who they are; their skill, behavior, attitude, proficiency, and how they will make a measurable change in their conversation and messaging to perform like a champion.