The Seven Types of Sales Managers by Keith Rosen 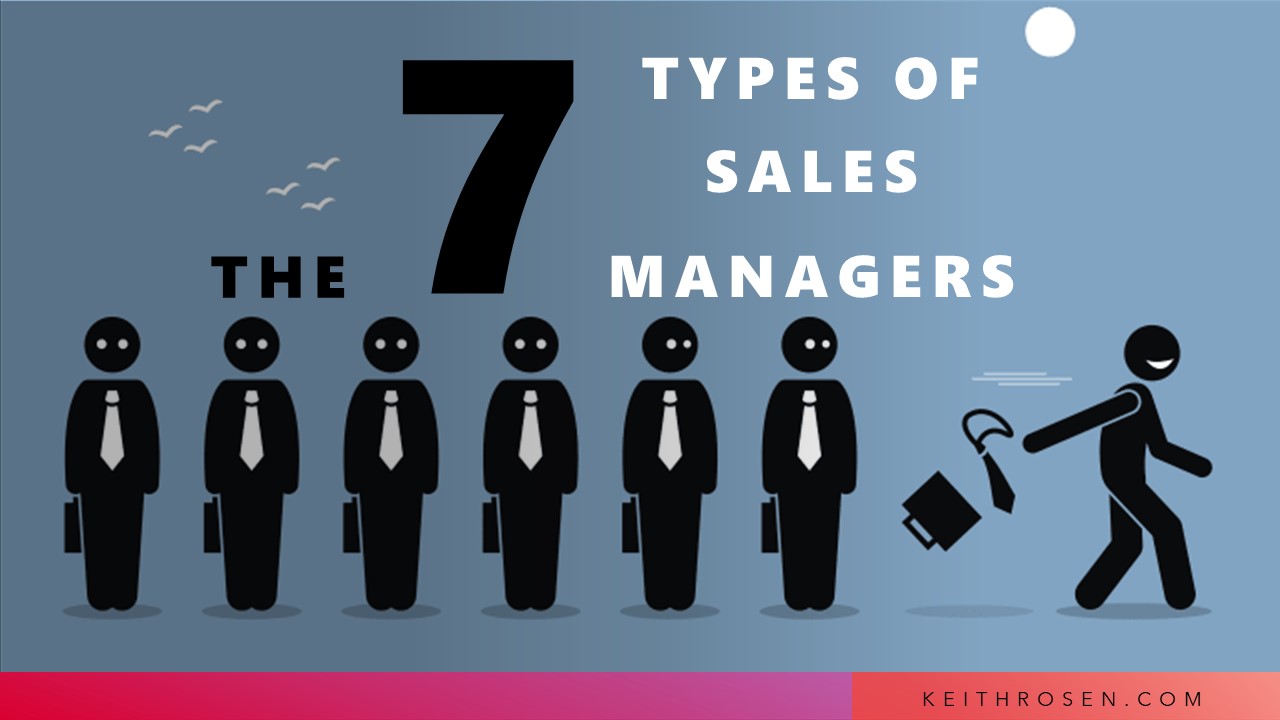 Since 1989, I’ve had the honor of coaching thousands of managers globally. Of course, every manager possesses their own personality, talents, skills, goals, and approach to managing their team. I’ve been able to identify the seven, most common types of managers, so you can self-assess and uncover the areas to focus on that will make you a world-class, resilient leader and coach. Which one best describes you – or your manager?

With all the effort managers put forth in a valiant attempt to create a thriving company culture or salvage a once positive work environment, at the core of every healthy or toxic workplace is the boss, manager, or supervisor. All roads go back to the manager. And if the manager isn’t willing to change, then, in the end, nothing will, especially your company’s culture.

As we’ve come to realize, people don’t leave companies. They leave their managers.

And when it comes to managing a remote team for the first time, it’s more important than ever to self-assess and identify the areas you need to let go of, the new skills and mindset to develop, and most importantly, the critical conversations you must have with your team so they can thrive in today’s remote workplace.

What follows are the seven types of managers that exist in every organization. As you read through each profile, be mindful of the attributes you possess, the skills and mindset you need to develop, and the limiting beliefs or habits you need to relinquish that are holding you back from living your greatness.

The Seven Types of Managers – Which One Are You?

Otherwise known as, the infamous Chief Problem Solver I often write about this is the most common of all managers. This manager believes their most valuable asset to their team is being the Subject Matter Expert, and that their primary objective is to solve their employee’s problems and challenges. This manager is like a heat-seeking missile, searching out problems to solve, and results to achieve.

It’s the eternal conundrum of promoting your top-salesperson into a management role without any management coach training. It’s then inevitable they default to being the CPS; telling people what to do because it worked for them, rather than tap into their individuality and critical problem-solving skills.

These Chief Problem Solvers are constantly putting out fires and are leading every conversation with immediate solutions they want their team to act on, instead of taking the time to ask the questions to uncover and respect their ideas and point of view.

Paradox: Managers create the very problems they want to avoid.

The costly and time-consuming paradox here is this, this directive manager is actually creating the problems and situations that they want to avoid, all because they don’t know how to coach, and, consequently, believe that, “Coaching takes too long.”

Every manager wants to develop a team of independent, self-driven, accountable people. However, when managers continue to solve their team’s problems, they’re creating the very dependency they want to avoid. The costly irony here is, when you provide a solution, and the solution doesn’t work, your employees then blame you for providing the wrong solution, successfully robbing people of the very accountability, self-motivation, and confidence you want to instill!

Managers who manage with a pitchfork do so with a controlling posture. They typically micromanage and push people for more activity to drive results, often through consequences, threats, and fear, eroding the very fabric of trust needed to build a champion team.

You’re either a spreadsheet manager or a people manager.

The pitchfork manager (aka, spreadsheet jockey) typically manages from reports to uncover each employee’s gaps and challenges, and, in turn, believes more activity is the answer to improved productivity. Unfortunately, doing more of the wrong thing leads to greater failure.

Reports and data only reveal WHAT each salesperson is doing around activity and results, not HOW they’re doing it.

If you’re not observing your team, managers have no idea what their people are really doing, making it impossible to identify best practices, and what the root cause is that separates their A players from their C players, especially when they’re both engaging in the same amount of activity.

These managers, like most, care about their people and their success. However, these managers think coaching and developing people happens by talking at them, or might I say, preaching, from their soapbox.

When I coach managers around a challenge they’re facing, a goal they want to achieve, or a level of buy-in and alignment they want to create with their team around change, I always coach the message.

I ask them, “Walk me through the conversation you had to try to achieve your objectives during these meetings.”

When the manager begins with any of these statements, they’re a Pontificating Manager.

If you’re having the same, redundant conversations with people, it’s because you’re back on your soapbox, focusing on talking people into your solution, thus robbing them of their confidence in each conversation. Instead, use questions to uncover their point of view and a solution they can own, be responsible for, and then confidently act on.

Tip from the Coach: Smash your soapbox.

Presumptuous Managers focus mostly on themselves. Their personal production, recognition, sales quotas, and bonuses take precedence over their people, putting their personal needs and objectives above the needs of their team. Presumptuous Managers also make decisions based on assumptions rather than facts, which are typically driven by their Ego and the belief they’re better than everyone else.

Presumptuous Managers experience more attrition, turnover, and problems with those they manage than any other type of manager. This is further compounded when the manager is also carrying a sales quota, and quite often, competes with their own team.

While typically assertive and confident, they are driven by their ego to look good and outperform the rest of the team. Instead of coaching their team, they blame their team for their performance, rather than taking accountability that true leaders do.

Got control issues? Possibly a perfectionist? The most common of all managers, the Perfect Manager possesses some wonderful qualities. While this type of manager has a tendency to shy away from coaching and training since they believe they, “already know everything,” many are open to change, learning, coaching, and personal growth, yet often to a fault.

Be Perfect or Be Human? Choose.

Their undying quest for perfection and over-achievement leads to over-engineering what are often simple solutions and processes, which further undermines this person’s ability to leverage their time, strengths, productivity, and individuality; creating a feeling of constant failure, frustration, overwhelm, and dissatisfaction.

If you’re trying to be perfect and everyone else is human, it’s difficult to foster an authentic, transparent, rewarding connection and relationship, especially when the Perfect Manager isn’t willing to be vulnerable, open, and authentic themselves.

When you continually place your unrealistic expectations on others that you place on yourself, and make assumptions about their confidence, trust, knowledge, values, and skill, and attitude, you’re continually setting yourself up for disappointment.

Most people confuse striving for excellence, which is lifelong learning, and improvement – with striving for perfection, which is something that is flawless and unattainable.

Perfect managers are obsessively driven to control everyone, and everything, especially results. An additional cost is, the Perfect Manager is often the bottleneck to closing deals. Their drive to make everything perfect leads to paralysis and any progress made now comes to a screeching halt.

Whether people, process, productivity, or performance, what’s underneath the need for perfection and control, is the FEAR of not achieving, producing, proving themselves, and, of course, being perfect.

There’s an abundance of self-imposed pressure when striving for perfection from an external perspective. So, be human, instead.

Never rely upon on external results, achievements, or possessions to define your self-worth. You do.

Also referred to as Parenting Managers or Pleasing Managers, the Passive Manager is obsessed with avoiding conflict and making people happy. They’ll do anything to avoid confrontation, from enabling people by doing their job, to putting their heads in the sand and hoping for problems to magically disappear.

This line of thinking comes at a personal cost, especially compounded with the fear that they’re unable to hold their employees accountable to their commitments and goals, without conflict. Doing so relinquishes any measurable consequence for poor performance, urgency, and need for change.

Consequently, nothing changes, other than the resentment many of your employees feel from being left alone, in a new workplace, without any guidance or coaching.

Leadership is not a popularity contest. It means having to make the right decision over the popular one.

You can spot a Passive/Pleasing Manager by looking at their team, their mediocre performance, and the number of people who should have been let go long ago.

The People Manager Coach encapsulates all of the good habits, qualities, and competencies the other managers possess but without their pitfalls.

Great leaders realize the primary objective of every manager is to make their people more valuable every day.

Take some time to write down and design YOUR ideal leadership profile. Only then, can you identify and focus on what you need to do and who you need to be, so you can become the exemplary leader and coach who creates the legacy you want. Now, you’re positioned to transform from manager to coach who builds a world-class team of sales champions.