Companies Still Don’t Know What Coaching Is. Adopt This Universal Definition of Coaching to Build a Coaching Culture by Keith Rosen 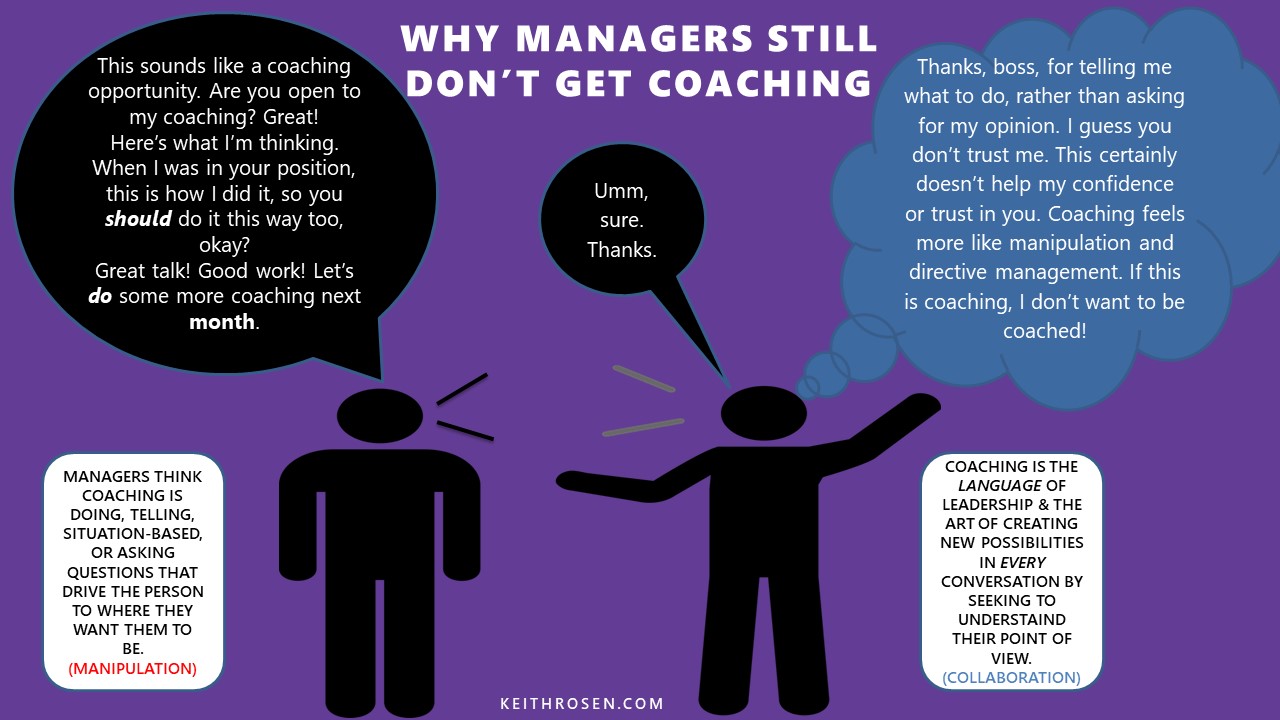 When I ask senior leaders if they have a companywide adopted, universal definition of coaching, the answer is typically, “NO.” That’s why, when managers say they don’t have time to coach, it’s because most companies don’t define what great coaching looks and sounds like. Here’s what this conversation sounds like, and my universal definition of coaching you can adopt to start building a coaching culture.

I was talking with a worldwide head of sales, their sales disablement team, and a few people from inhuman resources. They wanted me to help them create a healthy, thriving coaching culture, which 99% of companies desperately struggle with when attempting to embed coaching into the DNA of their company.

At some point during our conversation, each of the executives on the call made a similar comment. “We want our managers to coach more; at least 50% of their time.”

My response. If you want your managers to coach 50% of the time, they’ll never do it because you and your managers don’t get what coaching is.

Change your thinking around this. You don’t measure coaching with a stopwatch or by how much time you coach.

Coaching is not an event, a KPI you box-check, or something you DO to someone. It’s simply the language of leadership you speak in every conversation to create new and greater possibilities.

Coaching is the most effective form of communication that facilitates, growth innovation and positive change.

Your comment implies that your managers must spend more time away from their other responsibilities because you’re asking them to DO more of something, instead of CHANGING how they communicate that makes managing their responsibilities, goals and coaching your team an effortless habit, simply by learning how to speak “coach.”

Your managers’ job description isn’t changing. It’s just the way they think and communicate that’s being upgraded so they have the disposition, attitude, thinking, and are communicating like a world-class, exemplary leader by speaking coach.

Coaching is simply the strongest form of communication, which makes every conversation a coaching conversation. When everyone in your company, not just managers, speak coach 100% of the time, that’s when a true, authentic, coaching culture emerges.

If you feel you don’t have time to coach, then you don’t know what coaching really is.

BOTTOM LINE: If you’re asking your managers to coach more, then they were never coaching at all.

My Universal Definition of Coaching

When delivering my leadership coach training program, one of the first things we do is create alignment and consensus around what coaching is, so that we have a foundational definition to build upon. Here’s my universal definition of coaching that thousand of companies have adopted.

Coaching is a way of communicating, connecting, and engaging with someone in an empowering way that:

This is achieved through a process of ongoing, consistent interaction, observation, and unconditional support in a safe and trusting environment, that focuses on the unique and specific needs and talents of each individual in a way that facilitates long-term, positive change.

Whether you’re a manager looking to learn the essential skill and mindset of coaching or a company committed to supporting their leadership team by providing them with the training and skills they need to develop teams of remote sales champions, having a clear foundational and holistic definition of what great coaching looks like becomes the baseline from which a coaching culture can be built upon.

Additionally, it’s also the barometer to assess if your company’s coaching efforts are continually aligned with the characterization, mindset, and strategy of coaching that you’ve committed to.

Coaching = Unity. Having a universal definition of coaching and a clear vision of the values, skills, and culture you want to create that’s shared by all, is the first step to building and sustaining an authentic coaching culture.

P.S. – I’m personally taking on 10 coaching clients for my private practice. (I’ll never top coaching leaders, whether in a coach training course or one on one. It’s too much fun and way too rewarding!) If you’re interested, make sure we’re connected on LinkedIn, send me a note, or email me at KeithR@KeithRosen.com and we’ll schedule a call to see if there’s a fit.

Tags: coaching culture, coaching for managers, coaching salespeople, company culture, organizational culture
← Capital One Interview – How to Sell and Succeed as a Remote Salesperson
Sales IS Personal. 13 Questions That Hyper-Qualify Every Prospect and Selling Opportunity →