What They Said Isn’t What You Think You Heard – How to Destroy or Improve Relationships, Coaching and Productivity by Keith Rosen

Do you really know what people mean when they say, “Success, coaching, difficult, call, or strategy?” You’re not speaking the same language when coaching or collaborating with coworkers and employees. Here’s the #1 cause of problems, strained relationships and unmet goals and what you can do to immediately eliminate it.

SALES LEADERSHIP Named One of Amazon’s Top Sales and Leadership Books of 2018!

During my ﬁrst coaching session with Hans, a regional vice president based in Berlin, Germany, he provided an assessment of his team, where they stood regarding performance, and what his approach was regarding their professional development.

“I’ve been working with two of my front-line sales managers,” Hans began. “There’s a lot of diversity within my team. One is fairly new and doing well. I still have a lot of work to do in getting him up to speed with his team. As with many salespeople who move into management, this new manager was trying to avoid being the Chief Problem Solver, and doing the job of their salespeople,  out of fear they’d screw up a sale or a relationship with a customer.”

Hans continued to share the landscape of his team. “Now Sven, this other manager I’m working with, is a more tenured manager who’s been with the company for 18 years. I’ve only recently inherited this team, so I’m still assessing where I can deliver the most value.

“With the conversations I’ve had with Sven, it’s clear he has his own way of doing things. He’s hitting his numbers and getting results. However, I know if he became more strategic in his thinking and in his approach, he would be more successful.”

“Strategic,” I thought to myself. I have my own deﬁnition of what strategic means but wasn’t sure if my deﬁnition was aligned with Hans’s. Since I didn’t want to make any assumptions that could derail our conversation, I asked,

“Hans, when you say you’d like Sven to be more strategic, how do you mean?”

Hans clariﬁed. “Well, I mean that if Sven had a documented strategy and consistent process regarding how he will effectively manage and coach his direct reports, work with each customer, and support his team, it would help him focus on what he needs to do consistently, instead of his ad-hock, inconsistent approach that produces sporadic results.

Some people are successful despite themselves. It’s up to the coach to assess if this is an anomaly due to working in a thriving company, industry or territory, or if they truly have the right skills to perform like a champion in both good and challenging times. That’s when the true essence of a person’s character, courage, trust, skill, commitment, integrity, attitude, and perseverance become apparent.

“It’s frustrating that he doesn’t see value in developing a path to success and a longer-term strategy, albeit he’s successful now. I’m tired of having the same conversation every week. I’ve acknowledged him for hitting most of the key performance indicators on his scorecard, but told him that a more deﬁned strategy would make him more efficient, productive, and successful. His typical response is, ‘I’m not micromanaging my team.’ That’s why he doesn’t want to put a strategy in place.”

“Okay let’s explore why he may be so resistant to creating a strategy.” I asked Hans, “How do you deﬁne the word strategy?”

Hans replied, “It’s an executable plan. You have a goal and a deﬁned path, steps to follow and activities and tasks to complete in order to achieve it.”

“Did you ask Sven how he deﬁnes the word strategy?”

FROM THE SIDELINES: If you are speaking two different languages during a conversation, then the challenge that needed to be resolved or the solution to goal attainment may be the wrong solution to the wrong problem.

Hans took a second to reﬂect, then replied, “Maybe that he doesn’t want to stalk them or be on top of them every moment, challenging everything they do and have his hands in every decision or account. He wants to give them the autonomy to do their job.”

“This sounds like your deﬁnition of micromanaging,” I observed.

I followed with, “Is his deﬁnition of micromanaging the same as yours?”

“How about his deﬁnition of strategy?” I continued. “When you asked him to be more strategic, how clear were you to ensure you were both aligned with the deﬁnition?”

“I just assumed that if you’re a manager for a certain period, you better be clear about the difference between micromanagement and being a strategic thinker. It sounds like I made a stupid assumption. I think he may be collapsing the deﬁnition of strategy with micromanaging his team. Since I never asked, I just assumed we’d be aligned with what I mean. Probably not the best idea, considering the situation I’m in now.” 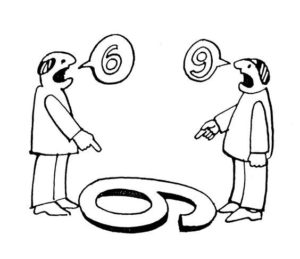 “It sounds like I need to have a reset conversation with Sven. I need to be more mindful around the words people use to ensure their deﬁnitions align with mine.”

I asked, “If you don’t have this conversation, how can this impact you?”

“So, the next time you approach Sven, what would it sound like?”

Hans said, “For starters, I need to enroll him in having this conversation.”

“Probably something along the lines of, ‘Sven, I was reﬂecting on our last conversation, and I owe you an apology. As we were talking, I never took the time to clarify what I meant by becoming more strategic, nor did I ask what your perception of what strategic and micromanaging are, which is why I feel there was a disconnect. I hope you can accept my apology, so we can reset this conversation and arrive at a better solution. Are you open to this?’”

“Well done!,” I told him. “Your enrollment statement was spot on and you even followed the enrollment model! When will you have an opportunity to have this conversation with Sven?”

“I’ll email Sven after our session to get something on the calendar today and explain the intention of the meeting, so we can better understand each other and come up with a mutual deﬁnition of what it means to be strategic, set a course of action, and create some questions to avoid this from happening again.”

“What ideas are surfacing?” I inquired.

“I can start with these Springboard Questions that you shared with me.”

TIP FROM THE COACH

Insatiable curiosity is the fuel for crafting better questions.

“It sounds like you did some great self-coaching!” I acknowledged. “When can I expect an email recap of our conversation and the conversation you’re going to have with Sven?”

“How about by the end of the week to ensure we had time to schedule the conversation?”

“That works! How are you feeling about our conversation?”

“Very enlightening!” Hans said with great excitement. “Thanks for pointing out a blind spot I didn’t see! I look forward to reconnecting and sharing the results of my conversation with Sven!”

By becoming insatiably curious and mindful of phraseology and the assumptions we make around the definitions of the words people use, you are going to ask more and better questions that seek to understand the other person’s point of view, while avoiding assumptions that you all speak the same language.

You Don’t Know What You Think You Knew

Questions that focus on the phraseology of communication, the definition of words and how each person defines them, allow you to clarify what you’ve heard or go into a topic in more depth, so you can become clear with what people are really saying and ensure uniformity and alignment in language to ensure your focused towards a shared vision, goal or solution. Moreover, questions will challenge everyone’s core assumptions and turn off automatic, passive listening and reactionary responses in every conversation.

Leverage the springboard questions Sven used, to propel you and your team to your next level of success. And it may take only one question to begin the process.