The Buddha, The Angry Man and The Gift by Keith Rosen 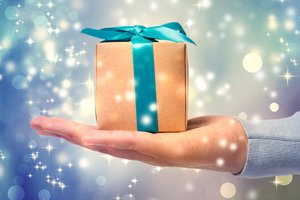 I don’t lay claim to this parable, as it’s been written and interpreted hundreds of different ways. Here’s my version of this powerful life lesson about selflessness, giving, building your personal power, and how to protect it – especially in the face of toxic people and the energy thief who can rob it from you.

After many days of travel, Buddha arrived at a small town to give a speech. Everyone was happy to see him, except one young man.

While Buddha spoke, the man was shouting at him. Buddha did not pay attention and continued speaking. This infuriated the man even more. He walked directly in front of Buddha and continued to ridicule him. “You have no right to teach others. You’re stupid and you’re a fake!”

The crowd began to react to this young man’s caustic behavior. Buddha stopped the crowd from turning against him and said, “It is not always necessary to counter aggression by aggression.”

Instead, he turned to the man and asked, “If you buy a gift for someone and that person does not take it, to whom does the gift belong?”

The young man was surprised by the question, thought for a moment and answered, “It would belong to me because I bought the gift.”

The Buddha said, “Correct. It’s the same with your anger. If you become angry with me and I don’t feel insulted nor accept your hostility, the anger falls back on you, as it was initially yours to give. You are then the only one who becomes unhappy, not me. All you’ve done is hurt yourself.”

The young man understood, clasped his hands together and slowly bowed to the Buddha. It was an acknowledgement that this man learned a valuable lesson that day.

THE LESSON: No matter what the situation, if you surrender yourself to anger, if you surrender your personal power to others, they will always take your life away from you. Instead, be the mirror, the reflection of themselves, Now, the only person who truly gets infected by their negativity is them.

Those that are angry, it is pain and sadness that is disguised by the anger, and those who are hurt and attempt to put that on others are the only ones who suffer, if you’re mindful enough to choose not to allow it in. Instead, you can find your personal power in your higher self and put aside your ego.

Never let anyone rob you of your personal power because it’s about THEM, not you. Instead of allowing others to inhibit your greatness or try to dis-empower you; rather than choosing to react, be the gift you give to the world and to them. Never underestimate the positve impact and influence you can have on others. That’s why the gift is you.